I always wanted a daughter.  Always.  I wanted her to be my first born, so she could be my tiny helper as a girl and later my best friend as a lady.  I thought about this desire for a little lady every time my mother and I butted heads while I was growing up (also known as every single day of my childhood…and adulthood).  I swore I would be the best mother ever to my bundle of sugar and spice and everything nice because, after having been a girl for my entire life, I understood them.  I knew how to raise one right.  Appearance, self-esteem, materialism, friendship, education, gender roles, sex, drugs, rock and roll.  I had all the answers! I was a professional before ever having taken a swing.  Then, my eight pound six ounce piece of heaven landed on my chest, and I had to prove my parenting prowess.

Let’s start with the pink explosion.  I put a stop to that before it started.  Yes, I’m one of those parents that buys into the idea that too much pink (or any one notion) has the possibility of stifling a child and leading her down a path that may not jive with my hopes for her life.  The Man agrees.  We asked family and close friends to refrain from buying princess, fluffy, frou-frou outfits, toys, and books for the girl as soon as we saw those two tiny train tracks on the ultrasound (for those that don’t know, that’s what itty bitty lady parts look like on a sonogram).  We knew we wanted a rainbow in her closet, a world of characters in her library, and endless opportunities in her toy chest.  We’d show her the whole world and then let her decide if she wanted to rule it from under a tiara or from inside the Oval Office.  We planned to stress the idea that her success in life would be determined by her hard work and dedication not her birth rite and beauty.

She’d wear pants and skirts.  She wouldn’t always have a bow in her hair.  She’d have a play kitchen and a toy toolbox.  She’d have a million nicknames, none of which would involve royalty.  She’d sing, dance, read, run, jump, fall, jump again, draw, clean, cook, build, experiment, vroom, and pretend!  She’d play with girls and boys, babies and big kids.  She’d respect her elders and play nicely with peers.  She would love people of all nations and all religions and be open to new experiences!  I didn’t expect that she’d be born this way.  I was very ready to teach her everything!  She would be so effing well-rounded that some would mistake her for a circle.  Seriously, raising the girl was in the bag.

Even the older years were planned out!  Food wouldn’t be a chore or an enemy.  Exercise would be routine from the beginning.  Bullies, gossips, liars, or outright bitches would have no place at our table.  Her beauty would come from the inside, but her appearance would be neat as well.  No dating ever.  Or at least until college (yes, college), and we would have many, many open conversations about sex and the intense responsibility that comes with it.  Drugs would absolutely be unacceptable, even just a little pot.  I didn’t forego coffee, soft cheese, runny yolks, hot dogs, and every form of alcohol for nine months just so she could randomly lose brain cells in some kid’s basement because she was bored.  Anytime she considered how cool or calming smoking might be, we’d take a little trip to the Oncology unit of the local hospital.  Let the patients there talk to her about the sweet intoxication of nicotine between puffs on an oxygen mask.  And as far as alcohol intoxication was concerned, we wouldn’t be taking part in the “as long as they’re doing it under my roof, I know they’re safe” school of thought on underage drinking.  She’d wait.  Patience is a virtue, right?  Yes, a little strict and a lot old school, but if the Duggars can teach their oldest daughter of nineteen children to save her first kiss (yes, kiss) for her wedding, then I was certainly going to try to keep the girl on a straight and happy path as well.  Overprotective, concerned, worried, and anxious would be the best adjectives used to describe my parenting of this amazing gift I was given, as well as loving, proud, encouraging, and grateful.

And then I met her, heard her cry, and saw the deep pools of soulfulness that were her eyes.  Those eyes that almost immediately wandered away from me and locked on her father.  Four years later, they’re still stuck on The Man.  Turns out my planned partner would much rather hang with Daddy than pretty much anything else in the entire world.  So much for being my sidekick!  He’s the center of her universe, and I’m just the Lady who keeps trying to get her to do annoying things like eat and bathe and sleep.  She’s also not as eager to blindly follow my instructions as I had hoped and almost never listens without providing commentary on the situation first.  Turns out girls are kind of feisty.  Guess I missed that chapter in my parenting prep.  I was a perfect angel, so I can’t imagine where she gets it either.  I can say that the girl is well-rounded, though, and demands each of her interests be engaged…all the time…everyday.  Want to know how hard it is to read, cook, run, and sing all at the same time?  Don’t ask the girl.  She’s got it down and does it often, expecting that everyone will join in her games.  Who knew that girls could be so exhausting?  Seriously, who knew and why the hell didn’t you write a book about it?  I would have appreciated that book.  And I wish there had been a chapter on all the sass.  I mean, hot damn!  The girl can throw shade, give side eyes, and shoot daggers all in just one glance up from her bowl of Cheerios. 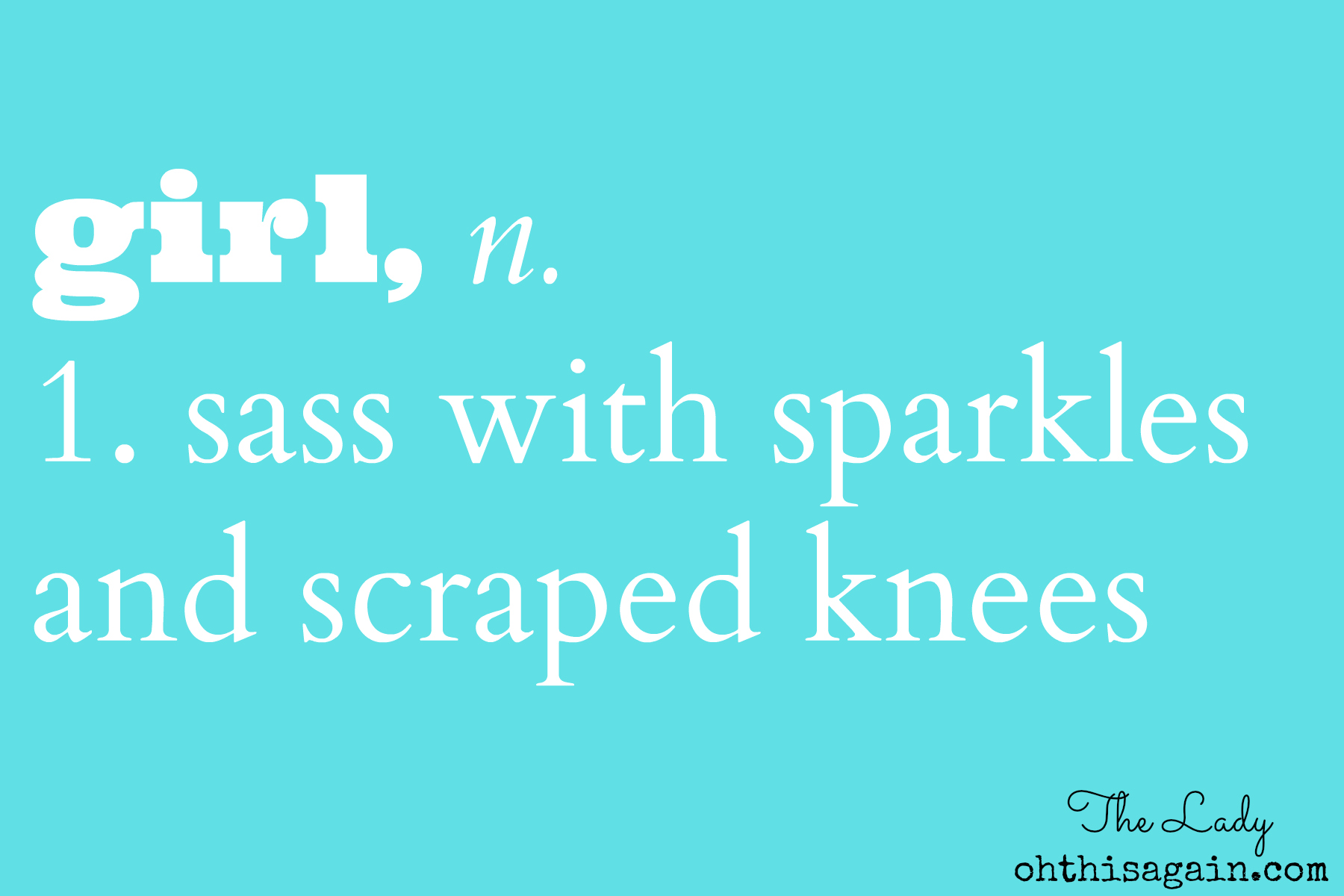 Despite some strong family opposition, we have managed to mostly stave off the princess mystique…and then Frozen happened.  And I kind of love Anna.  Barely wears a tiara.  Straps on her boots and fights her own battles.  Puts her family first.  Makes mistakes but learns from them.  Can sing and dance and throw a punch.  Never bares her midriff and always dresses for the weather.  My kind of princess!  So what now?  If we start down Princess Lane, can we make it out without being covered head to toe in pink and tulle and privilege?  Will it open the door for family and friends to start tossing tiaras and royal nicknames her way?  Is it possible to just be a bit of a princess?  I’m not ready for these questions.

Which makes me wonder (also known as freak out about) what else am I not ready for?  If she’s a lesbian, I know I’ll love her as I always have, but how do I teach her about dating girls?  I thought I only had to worry about hoes coming after the boy and the baby not the girl too.  Should the Man have those conversations?  Because I’m pretty sure his idea of the girl dating involves his shotgun pointed at her suitors running far, far away.  What if she doesn’t want to go to college?  What if she’s vegan?  What if she wants to move across the country?  What if she doesn’t like Lifetime movies?  Goodness gracious, what if she’s bisexual, and I have to keep everyone back?  I’m probably going to need a bigger stick…and definitely a bigger glass of wine.

Is it possible that I don’t know everything there is to know about how to raise a smart, capable, safe, kind girl to adulthood?  Could I have been wrong?  The Man says it wouldn’t be the first time, but he’s sleeping on the couch tonight, so I wouldn’t trust his opinion.  I feel underprepared for leading her through life.  I feel lost in a world that desperately wants to sexualize her body, that wants to minimize her intelligence, strength, and ability, that wants to keep her quiet, that wants to railroad who she is just because she was born with tiny train tracks.  I didn’t know how daunting it would be to have a daughter.  I’m kind of a crazy person when it comes to overthinking, and even I didn’t know this level of concern existed until they handed me that tightly wrapped being of inspiring sweetness.

I always wanted a daughter.  Always.  And I couldn’t be happier to have this terrifying, confusing knot of stress in my stomach at all times because of her existence in my life.  I’m up to the challenge.  I have to be!  Who else will teach her about all the great female writers, scientists, politicians, athletes, and comediennes that so often go unmentioned?  Who else will help build her build a wardrobe that is respectful, fun, colorful, and thrifty?  Who else will show her how to tell a friend from a foe from a frenemy?  Who else will explain to her the amazing powers and dangers of finance, social media, world news reporting, and Target?  Who else will watch the girl’s shining eyes always look for Daddy but know that she needs no one more than her Mommy?  Yup.  That role is all mine, and although my nerves might disagree, my heart would have it no other way.

One thought on “Raising The Girl”